Gallery Hours: By Appointment Only
Yashar Gallery proudly presents a solo exhibition by a contemporary Japanese visual artist Natsumi Goldfish entitled “Window Mereology”, with an opening on September 27, 2018. Mereology (from the Greek μερος, ‘part’) is the theory of parthood relations: of the relations of part to whole and the relations of part to part within a whole.1 This exhibition focuses on one of Natsumi Goldfish's ongoing series, Window paintings made between Tokyo and New York City in 2017 to 2018. The exhibition will open on September 27, 2018, and it is on view by appointment through October 17, 2018.
A window is an opening and a surface that shows the most private and personal space in our mind and in real everyday life. A window exists as a connection one to another, inside to outside, you and me. A window is a place you see, a window is also a place where you are seen. A window is a connection and thus the most sensitive and fragile aspect of a space. Do those “sides” really exist, or do they exist only in our minds? A window connects and separates space at the same time, it only depends on how we understand the space, from small personal events that occur to individuals' mundane world, to the major current social or political issues, that they are all happening in the space. Even if we are not aware about everything happening, we are affected by them and we are affecting them to be happening. A small minimal unseen personal act influences the collective whole as society. We all know one way that a window changes a space, as a passage for the sunlight, it enables interior plants to grow. 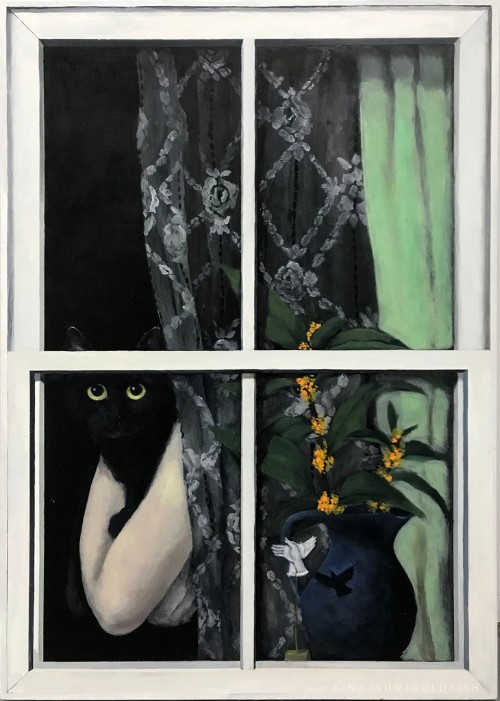 Natsumi Goldfish's window paintings are about nonverbal communications between two sides. As most of her works are conscious of their surroundings and audiences, the window series also carries the facet. A window is like a surface of a pond in nature that captures aquatic animals and terrestrial animals. A view from a window is common property for everyone there. It captures, displays and mirrors the habits, behaviors and curiosity of human beings. A window brings us security and insecurity against potential harm from external forces. It gives us partial and mostly visual information of the things of outside. At the same time, a piece of thin glass is too fragile to protect us from exterior dangers. However, windows are still present, from official residences, presidential palaces, to urban and rural houses of citizens around the world. A window is evidence and confirmation of our inborn nature to be connected to the rest of the world. Architecture can be seen as a material incarnation of values, economy, ideologies and what we are as societies and individuals. Natsumi Goldfish's window paintings, are a metaphor of architecture as mind, art, our deep thoughts, communication and structuring ideas. A window is a source of awareness. From both sides, a view from a window is the closest experience of another world, one that also displays reflection of ourselves in it. Sometimes the reflection of oneself is very subtle, sometimes it is bold like a fine mirror. In reality we are part of what we see, the world, and each of us affects the world we see today to look like what it looks like. What we can see “outside” is also about each of us and part of us, at some level, but we are only barely aware of the world we are born, raised and grew up, and someday will lay dying in.

Natsumi Goldfish writes “One day I realized that I must paint windows, when I realized that my attachment to the window was my attachment to the world, to the society, to the people. It was difficult to prove but I was surely an extension of them as they are of me. It was when I was cat sitting at a friend's place on a ground floor of a historical apartment in center city, Philadelphia, I was half naked, a very sunny summer day. I felt something, and I looked outside the large open window. There was a stranger, a man curiously looking inside. Cat in my arms and I stared at him still and quietly, but he did not know. He did not find my nor my cat's gaze. He could perhaps feel us but saw nothing sharp from outside, unlike the same window at night when it shows everything much clear with the lighting. I was witnessing his pure curiosity for a few seconds. It was the human curiosity I saw through his eyes. It was an intimidating experience for me that I almost felt like the stranger had access to witness my inner cells growing. In Tokyo windows were much unfortified, and often kept opened or unlocked. I used to forget to bring the door key with me, but I always knew one of the windows was open. It used to be at least. Even if there were not much going on to see, I could always hear my neighbors, children running, vacuuming, a murmur, or faint music from open windows. I could always feel signs of life, daily life noises and smells. One thing it is universal, cats are always looking out the windows.” 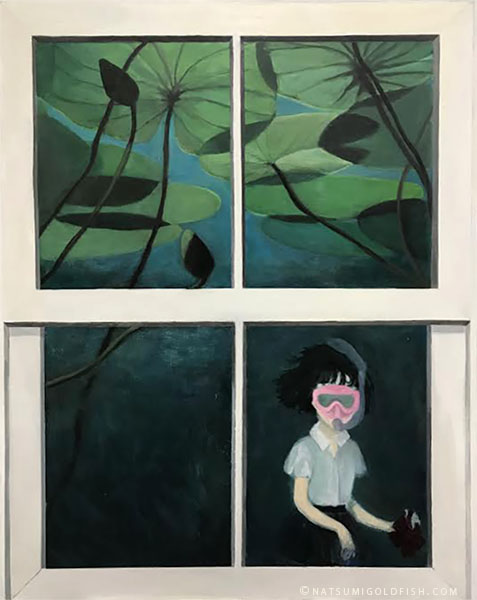 Natsumi Goldfish is a contemporary Japanese artist based in New York City. Natsumi Goldfish grew up in the fringe of Tokyo, a place of between of all, where nature and urban culture, and many different elements coexisted. The environment inspired and educated her to believe in pluralism, or something close to the idea of being between and both, which is an important element in her creation. In 2011 she moved to the United States. In 2013, she received her B. A. in Art from Tyler School of Art. Natsumi Goldfish primary works with oil painting. Her creation is based on her interest in conscious and unconscious human behaviors seen in the history as well as in her ordinary life.

Posted by Brooklyn Art Studios at 9:48 AM