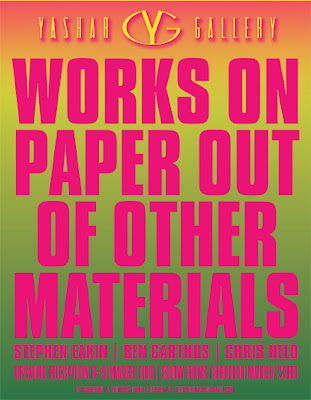 Eakin, Garthus, and Held share an interest in creating sculptures that are activated by modular components. Often responding to a desire for organization, and ultimately categorization, these works explore primary formal qualities via found objects, design history, and applied craft.

Stephen Eakin was born in Panama City, Florida during the summer of 1981, and received his MFA from the University of Minnesota, Minneapolis in 2007. He currently lives in Brooklyn, New York and has exhibited sculpture and installation nationally and internationally. In 2009 he was an artist in residence at Kitchen Budapest, and in 2011 he spent six weeks on the road exhibiting works across the U.S. wth the arts collective Non Solo. Recently he mounted his second solo exhibition in New York City at Honey Ramka in Bushwick titled "Permanent Collection", and will be showing new work this March in "Land After Time" at E.Tay Gallery in TriBeCa.

Raised in rural Wisconsin, Ben Garthus received his MFA from the University of Minnesota and is now a Brooklyn-based sculptor, printmaker and designer. His work has been featured at Honey Ramka, Regina Rex, the Walker Art Center, Socrates Sculpture Park, Grounds for Sculpture and Queens Museum and published in Sculpture Magazine and Public Art Review.

Posted by Brooklyn Art Studios at 6:24 AM