Patricia Gaeta: Through the Thicket of Things 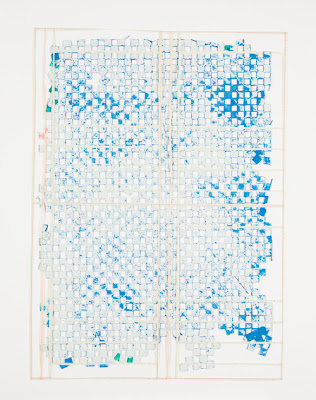 Masters & Pelavin is pleased to present Through the Thicket of Things, the artist’s first solo exhibition with the gallery. In a series of abstract collages, Gaeta uses graph paper as her primary medium and main source of inspiration. Although her geometric constructions are painstakingly hand-cut, carefully layered and precisely ordered within their rectangular formats, the overall compositions have an intriguing energy, depth, and visual complexity.

After finding countless boxes of old graph paper in a trash bin, Gaeta began using it for her drawings. Soon, however, she discovered that cutting the paper along it’s gridded lines with an X-Acto blade and removing small sections of the graph was a process that opened up new artistic possibilities. Although occasionally her work looks as though the paper may have been machine cut, a closer look reveals her precise, labor-intensive process, with spontaneous, hand-made imperfections evident in the highly detailed work.

By its very nature, graph paper contains at least two perpendicular sets of lines forming a square grid, inviting activities such as three-dimensional drafting. Using this flat-surfaced grid as the jumping off point, Gaeta builds the illusion of depth with minimalist paper squares and cubes that have been glued flat against the graph paper. At the same time, she creates literal depth by building up layers of paper upon various shapes, raising and precariously overlapping them, adding height and volume to the geometric configurations. The boldness of these vivid, colorful designs, coupled with the delicate, tessellated nature of the thinly cut paper, create striking sculptural patterns that evoke a range of crafts, such as crochet, weavings, mosaics and architectural renderings.


Much of the work in this show was, in fact, inspired by architecture, particularly the empty, dilapidated buildings near Gaeta’s hometown of Niagra Falls, New York. Recalling the broken factory windows and rusting exteriors, many of the small collages in this show evoke a sense of uninhabited space and industrial decline, while her larger pieces tend toward proliferation and renewal. Her use of graph paper and the strict, systematic nature of architectural drafting it elicits are juxtaposed with worn, broken down materials such as ragged-edged paper, perforated vellum, wood veneers and flaking paint in luscious hues, suggesting an elegant and ordered decay.

As Gaeta herself explains, “The use of graph paper is less common today as computer software has taken over many of the paper’s former uses. I want to go back to those humble uses, to a hand-made, craft-based art that eventually breaks down and deteriorates, but is ultimately more tactile, engaging and visually pleasurable.”


Patricia Gaeta Through the Thicket of Things

Posted by Brooklyn Art Studios at 10:35 AM