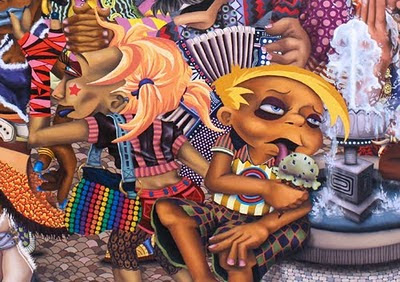 The Yashar Gallery is thrilled to present new work by Dustin Klare. The solo show, “Somewhere Like This”, unveils labor-intensive paintings, drawings, and photos from the artist. Klare has exhibited around the country and is an Adjunct Professor of Art at two universities in New York.

The artist claims that the life force, energy, and motion of an urban environment and its public spaces are striking, powerful, and often beautiful. Such spaces are filled with diverse peoples, co-existing and moving through the urbanscape with a rhythm and harmony akin to a choreographed dance. No matter what their background, each character in this performance plays a vital role in fueling the living, breathing, and pulsating city.

Be it through painting or other media, Klare often attempts to depict these characters as they navigate the urban landscape. The figures in his work do not always adhere to realistic conventions, but rather they often possess elongated, exaggerated, cartoonish features, and contort their bodies into complex yet lyrical poses. This stylized approach allows him to further explore an idealistic equality amongst the figures, a quality that is seldom experienced in settings other than a diverse, public, urban space. He also frequently uses bright color schemes and patterns in the work, amplifying their energy while also reflecting the various textures, surfaces, and fabrics of a crowded urban scene. Each character is unique, but the dense patterns and elaborate layering can begin to blur the edges where one person’s body ends and another begins.

This vibrant and energetic show opens on Friday, October 7th with a public reception from 6-9pm. The exhibition will remain on view through October 29th. The gallery is open on Saturdays from 12-4pm or by appointment.