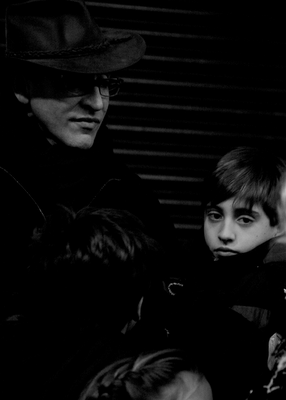 Reaves Gallery is pleased to announce the opening of “SOLO” on Saturday, February 5, 2011. This solitary exhibition features the photography of James Edwin Hall on view through February 23rd.

James Edwin works in street settings, concentrating his efforts in high pedestrian environments. Working with variety of formats (digital, 35mm, and medium format TLR (Twin Lens Reflex)) he is able to create timeless pieces that ensure concentration on the subject and build the integrity of the work.

The timeless appearance is reinforced by the artist’s continuing efforts in cities from the West Coast to Western Europe. Having collected images from San Francisco to the Bible belt of the South, Tennessee, to the archaic scenery of the United Kingdom, the artist frames a plethora of individuals. This breadth of study further enforces the validity of his humanistic theories.

Lastly, all of the imagery put together for the show is of candid nature. By shooting from the hip, sweeping his camera up before a subject’s face, and even concealing his focus with his TLR, the artist maintains the integrity of the human expression.

James Edwin Hall was born and raised in the United Kingdom in Manchester. He moved to the United States at age 11 to the state of Tennessee. He received his education at the University of Tennessee, where he graduated with a B.A. in Studio Arts with a concentration in photography.

He has been living in New York since 2008 continuing his photographic candid street portrait series and seeking inspiration for his continuing abstract figurative paintings. He works and lives in Brooklyn.

His work has been exhibited in galleries in Tennessee and New York, including the 2007 ‘Elixir’ show at the EWING Gallery in which he won Best Undergraduate Entry for his work. His work has also been featured in the Phoenix Literary/Arts Magazine, and online in BBC’s Portrait of Great Britain.

The opening reception for “SOLO” will take place from 7-10pm on Saturday, February 5, 2011 at Yashar Gallery, 276 Greenpoint Avenue, Bldg. 8, Ground Floor, Brooklyn, NY 11222. The exhibition will run through February 23rd.